A little bit of History

Our group opened on Thursday 10th September, 1931. The first members were the non college boys withdrawn from the 16th Preston (Loyola) troop Catholic college. We were based at the then English Martyrs 'boys' school yard in a hut 60 feet by 20 specially built by Messrs Pius Baines and Sons. A year later, the hut was moved to a plot of land on Leighton Street, next to the canal, October, 1932. A month later, the 46th Preston (notre-dame) Wolf Cubs started on Tuesday, 29th November, 1932.

During the war, many of the group members joined up and records show 46th Preston Scouts, James Cairns and Douglas Rudd on the 1939-45 roll of honour RIP.

The group has moved locations a number of times in Preston including a Mill on Meadow Street, St. Ignatious social rooms and school, St. Walburge's social rooms and in 1968 we were welcomed by Fr. Sowerby and made our home at Sacred Heart Parish Ashton, in the school on Poulton Street then Marion House and most recently, the Community Centre on Beech Grove.

We are currently recruiting young people and adults alike, to join us in our highly active group. We have a great team of enthusiastic leaders with over 100 years experience between us.

You will see some of our members at the Cenotaph on this Remembrance Sunday which we have attended for the past 25 years. We are celebrating our 80th year in 2011 so why don't you pick up our trail and follow in our adventure.

These three photographs are from around 1937. 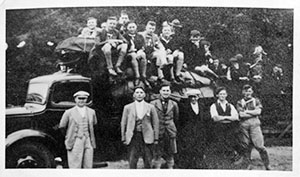 Boys about to embark on a day out, maybe even to camp 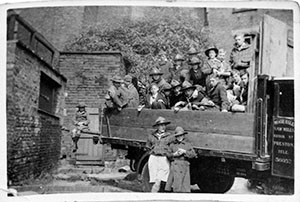 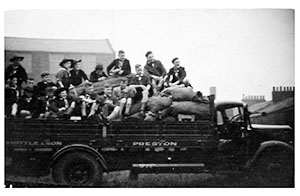 Another showing the livery of Whittle and Sons, Preston

‹ ›
46th Preston scout group sections meet at the Community Centre at Sacred Heart Church.
Though we are associated with the Church and attend Church Parade every second Sunday of the month, church attendance is NOT a condition of membership of the Scouting Organisation.